Barb, my wife, and I just celebrated our 26th wedding anniversary and as is common we reminisced about our life together. As we talked, we realized that it has been 15 years since we began making our initial flagship product: High Vitamin Butter Oil. Wow, much has changed over the years, but our consistent dedication to our employees, customers, and business partners has not wavered.

Thinking back, our dedication, hard work, and entrepreneurial risks have brought much health and joy to people all over the world. It is truly humbling. Our family is not boastful, almost to a fault I believe, but I wanted to share a snap shot of our butter oil history. In order to celebrate this with you, we are having a short sale on our butter oil, which is extremely rare! We are also offering a giveaway of 15 bottles of the liquid butter oil.

Now to take you back. I was serving as a Vice President of a steel company in Illinois when we bought a farm in Holt County, Nebraska in 1999. Barb and I took a beginning farming class in Knox County taught by the late Terry Gompert who suggested that we start a grass-based dairy farm. We didn’t know what we were going to do. We purchased a small herd of milking Shorthorn cows, and housed them at a dairy farm in Nebraska until we moved. I learned how to milk cows through a vacation spent working on a dairy farm in Wisconsin in late 1999. I also worked at another dairy farm in Nebraska in early 2000. I resigned from the steel business in December of 1999 and we moved our family from Illinois to Nebraska. At this time, we had three children: Ruthie, Claire and Addie. We moved over New Years Y2K. In fact, we pulled into our farm driveway around 1:00 am on New Year’s Day 2000; this was the start of a new decade and new way of life. Below is a picture of our cows on pasture, named Robin, and our daughter Addie in the early years.

It was a risk to move our family across the country to a dairy farm not really knowing how to farm nor how to make a living farming. We were naive, but determined when we first moved to the farm. We built an outdoor dairy barn and planted grass. I walked miles setting up fencing while Barb and the kids dug thousands of thistles by hand. I lost an incredible amount of weight during set up. We started milking in June of 2000. The first day of milking Barb broke her collarbone when 9 months pregnant with Carlie. She was out helping to bring cows into the barn and a cow charged her, hit her and fell on her! On one occasion when night milking, a cow stepped on my hand and I couldn’t get the cow to move. I broke something in my hand needless to say!

I went with Terry Gompert to a food and farming conference in Sioux City, Iowa in the spring of 2001. Sally Fallon Morell spoke and discussed the work of Dr. Weston A. Price and high vitamin butter oil. I went to a local second hand book store and found an old edition of Dr. Price’s book. We had also researched the idea of making cheeses, but we started making butter oil in the summer of 2001. We were ideally set up for this work from a grass perspective and were determined to do something healthful with our work.

We started in our kitchen with Barb spending hour after hour working the cream, and the girls and I setting up the centrifuge technology and working the farm and grass. We made our first label on homemade labels that we printed out ourselves. The labels would bleed when water got on them. We shipped approximately 250 jars the first year, which we believe was 2001. We developed products to match the teachings of the Weston A. Price Foundation. We homeschooled and had a couple of Weston A. Price Foundation gatherings at the farm, whereby we taught and the children played as a group. Below you’ll see me and our daughter Claire. 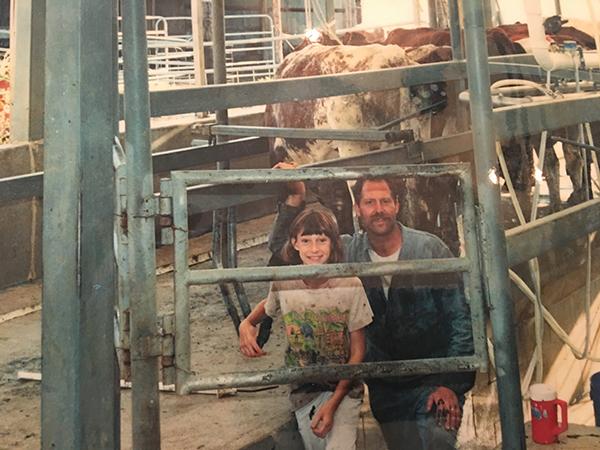 Following are some of our memories of dairy farming:

Above is a picture of Barb and our newborn son Max with one of our favorite cows, Belle. Over time the workload became too much for our family. We were managing employees, and vendors at the same time were focused on our customers, sales, marketing, speaking, labeling, accounting, manufacturing, farming, milking, home schooling and our family. After assessing the jobs we were doing, we realized the one thing we did not need to do was milk the cows.

Giving up milking cows was difficult for the entire family. It was what we loved most. Our youngest two, and even the third of our six children, never truly had the same farming experience as their older three sisters. They still work, but the experience has been different for them growing up in our home.

See the picture of our daughter Ruthie, who we identified as a workhorse above, holding her dog Buddy.

Once we decided that milking cows was unsustainable, I contacted the consulate in New Zealand and Argentina as these parts of the world had a good reputation for their knowledge of grass and a more natural dairy farming approach. I received lists of contacts, and sent out mass faxes asking to explore a possible business partnership.

Lucas, who is our partner in Argentina, was the only one who replied. I flew to Argentina and met the family and toured their facilities and dairy. We were both willing to try a partnership. It took a couple of years to develop a routine. I flew back to set up the farm and more importantly the handling of the product. I spent a month in a small town unable to speak with anyone. Lucas left me there and he was the only one in the family that spoke English well. So for a month the only way I could communicate was to pantomime or go to computer and use a translator and type back and forth. We recently published a statement provided by Lucas and more information about our partnership.

Below are Friesian and Jersey/Friesian crosses of cows on Argentinean Pampas and a detail of the pasture:

In conclusion, we are part of the foundation of the current grass-based dairy farm movement. We developed our high vitamin butter oil prior to there being a demand for the product. Our launch of high vitamin butter oil inspired others to create similar products. Even our success in bringing forward the concept of cod liver oil created through non-heat extraction has inspired other companies to take a similar path. The establishment said these endeavors could not be sustained. The conversations have changed. You can now see a deepening of this movement through others joining the effort. 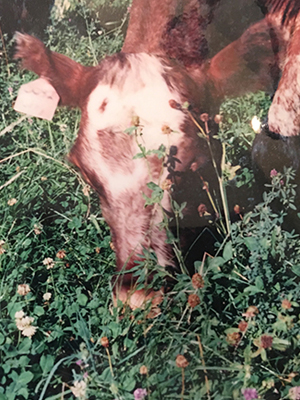