In basic biology lessons, grade school students typically learn about the concept of scientific (or taxonomic) classification. As students generally are told, taxonomy—the science of “naming, describing, and classifying organisms”—makes it easier to find, identify, and study plants and animals (which, in taxonomic terms, are kingdoms, alongside other kingdoms such as bacteria and fungi).

Scientific naming uses a binomial system made up of genus first and species second (as in Homo sapiens). Similar species are grouped into genera (plural of genus), with “similarity” determined by physical attributes and DNA sequences, where available. As shown in Figure 1, which illustrates a general animal kingdom classification, family represents the next level up the taxonomic hierarchy after genus. Figure 1 [adapted from this chart] provides examples from the Gadidae (“cod”) family of fish at the family, genus, and species levels.

Ushered in by famed naturalist Carolus Linnaeus in the 18th century, the now-universal language of scientific classification arose to bring order to the jumble of nicknames and common names used to refer to plants and animals, which tended to vary not only by language but also, frequently, by region. In the twenty-first century, however, the distinction between scientific and vernacular names still can give rise to confusion. The discussion that follows is intended to assist readers (the majority of whom are not fish scientists) in understanding the distinctions between taxonomical names and common names for fish commonly referred to as “cod.”

In 2013, the World Health Organization/Food and Agriculture Organization (WHO/FAO) Codex Alimentarius Commission approved the development of a Codex standard for fish oils as proposed by the Codex Committee for Fats and Oils. The 2015 draft Codex standard defines cod liver oil as “derived from the liver of wild cod, Gadus morhua [the Atlantic cod] and other species of Gadidae” [emphasis added]. The Soviet Encyclopedia likewise defines cod liver oil as “a product obtained from the liver of fishes of the cod family (Gadidae).” The Gadidae or “cod” family is a large family of marine species found in cold to temperate waters that currently is understood to include 20 different genera comprising 55 species. As shown in Table 1, Gadidae includes the Gadus genus as well as haddocks (genus Melanogrammus), whitings (genus Merlangius), pollocks (genus Pollachius), and others.

It is important to understand that despite its scientific veneer, taxonomic identification can be fluid, and scientists may reconsider prior classifications when what they know about a given species changes. Thus, in the 1800s, the Gadidae family comprised fewer genus types overall but included many more species under the Gadus genus than it does today. Even as recently as 2006, the Gadidae family was defined as having 16 genera and “about 31 species” (versus the 20 genera and 55 species shown in Table 1). This shifting taxonomic landscape is due in part to the advent of modern DNA testing, which has brought about a variety of changes to generic assignments.[1] [See references at bottom.]

The so-called Alaska (or walleye) pollock is a prime example. In the 1800s, the species belonged to the Gadus genus within the Gadidae family. Subsequently, it was reclassified into the Theragra genus as Theragra chalcogramma, still within the Gadidae family. Recently, however, the Theragra genus has come to be viewed as a synonym of Gadus, and it no longer exists as a distinct, recognized genus within Gadidae. Instead, in 2013, modern genetic studies “definitively” situated T. chalcogramma in the same “evolutionary lineage” as other Gadus species, and the Alaska pollock rejoined the Gadidae family’s Gadus genus, becoming Gadus chalcogrammus. Moreover, these studies established that G. chalcogrammus (Alaska pollock) actually is more closely related to G. morhua (Atlantic cod) than other “cod” species.

Interestingly, despite its misleading common name, Alaska pollock has never belonged to the Pollachius (pollock) genus (although the latter, as shown in Table 1, is also a member of the Gadidae “cod” family). Nonetheless, despite belonging to two different genera, both G. chalcogrammus and Pollachius virens are commonly called “pollock.”

Under current taxonomic consensus, the Gadus genus consists of four species. As shown in Tables 1 and 2, three of these include the word “cod” in their common name and one is the just-discussed Alaska pollock. Green Pasture currently relies on the Pacific cod (Gadus macrocephalus). Table 2 lists the four Gadus species along with their geographic range.

As Tables 1 and 2 make clear, fish (such as the Alaska pollock) that are in the taxonomic “cod” family do not necessarily feature the word “cod” in their common name. Likewise, some common names that include the word “cod” are applied to fish that are not members of the Gadus genus and may not even belong to the Gadidae family! For example, the so-called “black cod” (called “blue cod” or “coal cod” in the United Kingdom and bacalao negro in Spanish) is a sablefish (scientific name Anoplopoma fimbria) in the Anoplopomatidae family. Similarly, a number of “rock cods” are actually in the grouper genus, Epinephelus, in the Serranidae family. (In the Philippines, in fact, a fish in the grouper genus [Epinephelus coioides], known locally as lapu-lapu and in English as the orange-spotted grouper, has been used to make a fish liver oil comparable in Vitamin A content to cod liver oil.) Fish such as “black cod” appear to be referred to colloquially as “cod” for marketing purposes because they share the well-recognized culinary properties of other “cod” species (i.e., firm, white, meaty flesh). Few restaurants are likely to jettison the established common name just because it is not taxonomically accurate.

Cod Liver Oil Then and Now

In L.J. de Jongh’s 1849 book titled The Three Kinds of Cod Liver Oil; Comparatively Considered with Reference to their Chemical and Therapeutic Properties, the author describes six fish species that were considered as excellent sources for cod liver oil in northern Europe and Scandinavia at the time.[2] [See references at bottom.] As Table 3 shows, all six species were members of the Gadidae family and Gadus genus in 1849, but only G. morhua remains in the Gadus genus now. The others, including Pollachius, are in the Gadidae family but are classified in other genera.

In 1855, L.J. de Jongh and coauthors wrote another book with the detailed title, Cod liver oil: causes of its frequent inefficacy, and means of removing the same: with remarks upon the superiority of the light brown over the pale oil, directions for its use, and cases in which the oil has been used with the greatest effect. (Would that title make the New York Times bestseller list today, one wonders?) It is interesting to note that, again, many different types of fish in the Gadidae family are described as being used to make cod liver oil, including both “cods” and “pollocks.”

These historical documents illustrate the fact that, for a very long time, people have recognized the exceptional merits of the Gadidae family in producing highly nutritious fatty-acid-rich fish liver oil. Because the Gadidae family is known as the “cod” family, it makes sense, therefore, that the oils produced from the Gadidae family (irrespective of genus) collectively have come to be known as “cod liver oil”—as the Codex standard also recognizes. Nonetheless, it must be acknowledged that the specific Gadidae genera and species that are used to make cod liver oil are highly dependent on availability. The largest Gadidae fish populations—but not the only ones—are caught and processed in Scandinavia and northern Europe where, not coincidentally, the cod liver oil industry has always had its epicenter. High-quality cod liver oil can also be produced elsewhere, including in North America.

As an American company, Green Pasture sources its fish from Alaska to produce fermented cod liver oil from the Gadidae family. The only two species of fish within the Gadidae family caught in meaningful numbers in the Bering Sea region are both within the Gadus genus: Gadus macrocephalus (Pacific cod) and Gadus chalcogrammus (Alaska pollock). At present, Green Pasture uses Pacific cod because it offers the best and most sustainable long-term availability, but some Alaska pollock also has been used in the past and may be used again in the future as determined by availability. As explained above, the awkwardly named “Alaska pollock”—a member of the Gadus genus and a close relative of the three other species in that genus—represents an entirely appropriate species from which to derive excellent, nutrient-dense cod liver oil.

It has not been common practice to list the species of fish on fish oil labels. Moving forward, however, Green Pasture will go beyond standard practice among fish oil manufacturers to identify family, genus, and species on its fermented cod liver oil labels. At present, that means that Green Pasture products will list Gadidae, Gadus macrocephalus. If it becomes necessary to make adjustments to the Gadidae species from which the oil derives, due to problems with availability or other issues, the labels will be updated with genus and species for customers’ information. In all cases, the nutritional and fatty-acid profile of the fish and resulting cod liver oil is Green Pasture’s bottom-line concern. 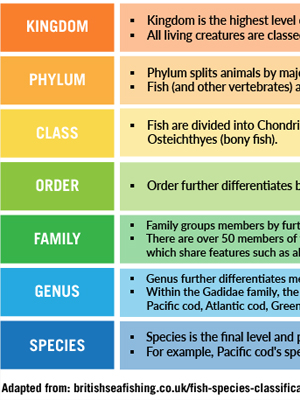