All Natural Vitamins, No Synthetics Added!

Our labels state “Fermented Cod Liver Oil contains naturally occurring vitamins A and D” and notes that “the amounts of these nutrients will vary.” Although the absence of a firm number of IUs in the Supplement Facts may disappoint some consumers, our statement reflects the reality that the fat-soluble vitamin content of fish oils is naturally variable when no synthetic vitamins are added. Scientists recognize that a number of factors shape the vitamin and nutrient profile, including geography, season, and fish species.

We consulted with Dr. Subramaniam Sathivel on the subject of the vitamin D content of fish oils and cod liver oils. Dr. Sathivel is a professor of Food Engineering at Louisiana State University and formerly a Seafood Processing and Engineering professor at the University of Alaska. Dr. Sathivel’s comments show that, far from being a simple topic, scientists are still trying to figure out how various forms of vitamin D make their way from plankton to fish, and also explain why scientists typically report fat-soluble vitamin values as ranges rather than averages.

Fundamentally, what is interesting to note is that Dr. Sathivel’s research mirrors our own experience and reaffirms the accuracy of the claims on our label.

Below is a summary of Dr. Sathivel’s research and conclusions on the subject. 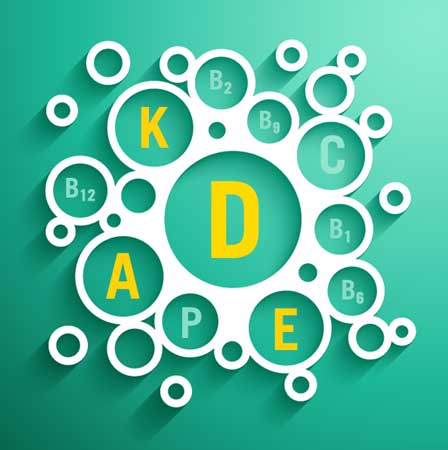 The Importance of Vitamin D

Vitamin D is a fat-soluble nutrient and plays major roles in bone formation (Holick, 2007). It is significant in brain, heart, muscles, immune system, and skin function. Researchers have also reported that vitamin D may be beneficial in reducing the risk of diseases such as cancer (Garland et al., 2009), including skin cancer (Armstrong and Kricker, 2001).

Vitamin D3 is known as the sunshine vitamin. It is synthesized in humans when skin is exposed to Ultraviolet-B light (UVB) at wavelengths in the range of 290 to 315 nm (MacLaughlin and Anderson, 1982). Vitamin D3 plays a major role in bone health in children and adults. It has also been reported that vitamin D3 reduces the risk of cancer and cardiovascular diseases (Wagner and Greer, 2008). The main function of vitamin D3 is to regulate blood calcium and phosphorus levels. It assists the absorption of calcium and phosphorus from food in the intestines and the reabsorption of calcium in the kidneys. This process allows regulation of blood calcium and phosphorus levels and normal mineralization of bone (Norman, 1990; Norman, 2006).

The lack of sun exposure may lead to vitamin D3 deficiency in both children and adults. Vitamin D recommended dietary dosage for adults is 5–20 g/day (200–800 IU), which may prevent osteomalacia in adults who are not exposed to adequate sunlight. Vitamin D3 can be obtained from diet or supplements (Lu et al., 2007). Vitamin D3 occurs naturally in high amounts in fatty fish such as salmon, herring, and mackerel, and in fish oils. Food manufacturers have also developed vitamin-fortified foods such as milk, yogurt, cheese, margarine, and calcium-fortified orange juice.

Fish oils are extracted from whole fish and fish byproducts including heads, liver, and viscera of fish. Fatty fish and fish liver are good sources of vitamin D, a fat-soluble vitamin (Mattila et al., 1995; Sunita Rao and Raghuramulu, 1995; Jacobs and Wood, 2004; Lu et al., 2007). Therefore, there may be the expectation that fish oil contains a consistently high amount of vitamin D. However, the amount of stored vitamin D in fat molecules in fish tissues may vary with a number of factors, including species, age, and size of fish. Vitamin D content in fish oil may vary with the source within the fish—flesh, liver, or viscera. Geographic location and season may also play roles in the variation of vitamin D content in fish oils. 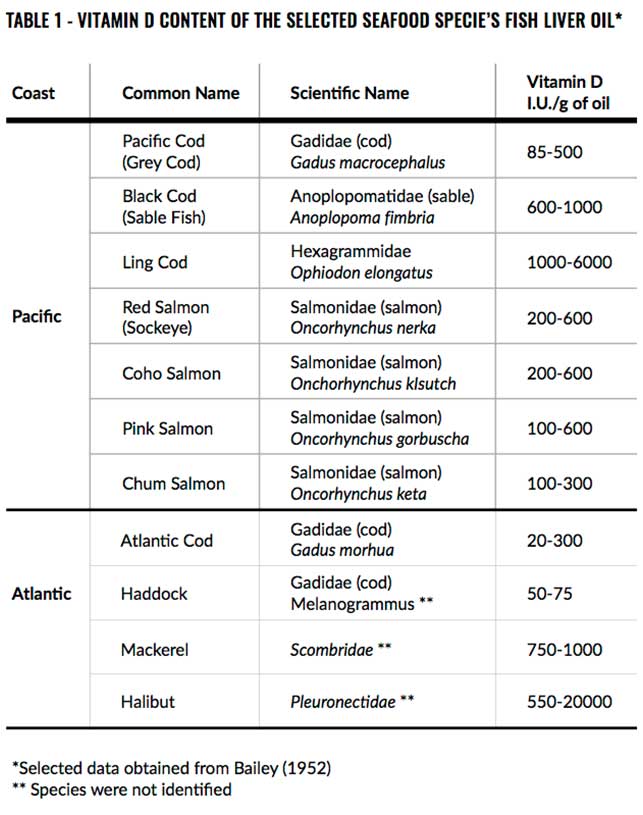 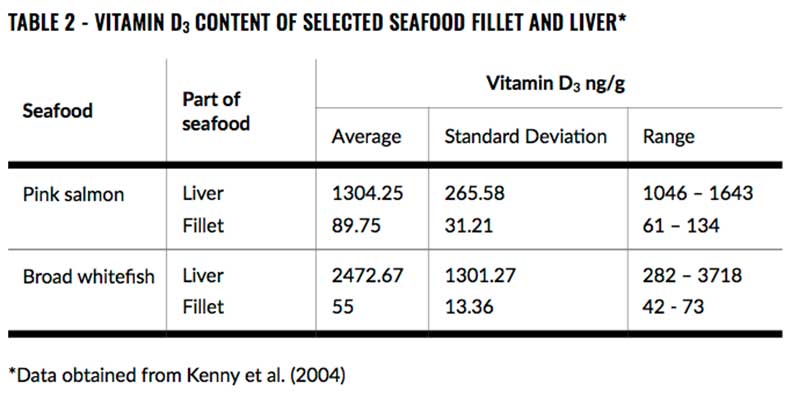 The previously mentioned factors may be reasons, in general, scientists have reported fat-soluble vitamin values as ranges instead of average values because the standard deviation for an average value of a fat-soluble vitamin is expected to be large. If the standard deviation of a value is large, then the value of individual samples would be expected to vary greatly, and a range of values may be more appropriate than an average value. For example, in 2004, the Kenny research group reported average vitamin D3 content (ng/g) of pink salmon fillet and liver of 89.75 + 31.21 and 1303.25 + 265.58, respectively. The standard deviations in their study for vitamin D content in the fillet and liver are large. This may be a reason the authors have also provided the range of vitamin D content (ng/g) in fillets and liver, which are 61-134 and 1046-1643 (ng/g), respectively.

Fat-soluble vitamins K, D, A, and E may be contained in fish oils. The vitamin content may vary with species, their ages, sizes, and parts of the fish. Geography and seasons may also influence their contents, especially vitamin D in fish oils. In my opinion, unless fish oil has been fortified with vitamin D, we should report the vitamin D content of fish oil as a range instead of an average value. If not, we should provide the standard deviation from the average value. It would be expected that a typical range of values would be more meaningful to a consumer without a background in statistics than an average value with standard deviation.